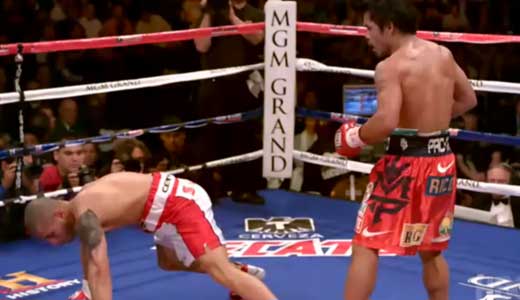 Review: 2009-11-14, one of the headlines of this boxing event was “Old school warriors, modern day heros”, and we are fully agreed that Pacquiao and Cotto are two warriors and heros, as they demonstrated in this fight. Manny Pacquiao (49-3-2), having won the IBO light welterweight title versus Ricky Hatton (another great fight of 2009), tried to win the 7th title in seven different weight classes. His opponent this time was Miguel Angel Cotto (34-1-0) that, for the second time, defended his WBO welterweight title. Even in the face of one of the strongest boxers in recent years as Cotto, Pacquiao dominated him in one of the best boxing fights of 2009. Watch the video!

Official video hosted on Hbo.com (refresh/reload the page and wait some seconds if you don’t see the player)