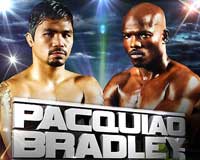 Review: 2012-06-09, good fight, especially the central part of the bout from fourth round to the eighth, but unfortunately the judge’s decision was outrageous: Manny Pacquiao vs Timothy Bradley gets three stars (fight ended by split decision). Compubox punching statistics showed that Pacquiao landed a total of 253 of 751 punches compared to 159 of 839 for Bradley; moreover Harold Lederman scored the fight 119-109 in favor of Pacquaio: so how is that decision made? Probably before the fight happened, just for money, since the rematch was already set for November…and Bob Arum himself confirms this version, here’s what he said after the fight: “I’m going to make a lot of money on the rematch, but this [decision] was outrageous”. Manny Pacquiao (54-3-2) entered as the No.1 welterweight in the world while the undefeated Timothy Bradley (28-0-0) entered as the No.2 light welterweight. Pacquiao vs Bradley is valid for the WBO welterweight title (Pacquiao’s fourth defense); they also faced each other a second time on April 12, 2014 (=Manny Pacquiao vs Timothy Bradley 2). Rate the video!