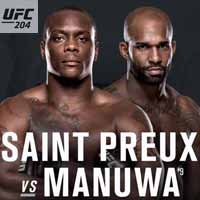 Review by AllTheBestFights.com: 2016-10-08, good finish between Jimi Manuwa and Ovince Saint Preux: it gets three stars (UFC Performance of the Night).

Ovince St Preux entered this fight with a record of 19-8-0 (74% finishing rate) and he is ranked as the No.12 light heavyweight in the world while his opponent, Jimi Manuwa, has an official mma record of 15-2-0 (93% finishing rate) and he entered as the No.14 in the same weight class. Both fighters have lost two out of their last three fights: ‘OSP’ was defeated by Glover Teixeira (=Teixeira vs St Preux) and Jon Jones (=Jones vs St Preux) while Manuwa lost to Alexander Gustafsson (=Gustafsson vs Manuwa) and Anthony Johnson (=Johnson vs Manuwa). Saint Preux vs Manuwa is on the undercard of Michael Bisping vs Dan Henderson 2 – UFC 204. Watch the video and rate this fight!