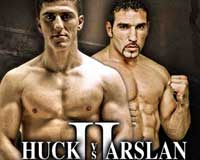 Review: 2014-01-25, tough fight with a good finish: the second fight between Marco Huck and Firat Arslan gets three stars. Marco Huck entered this fight with a professional boxing record of 36-2-1 (25 knockouts) and he is ranked as the No.2 cruiserweight in the world while Firat Arslan, 43 years old (14 more than Huck) has an official record of 33-6-2 (21 knockouts) and he entered as the No.13 in the same weight class (currently the #1 in this division is Yoan Pablo Hernandez). In their first fight Huck defeated Arslan but it was a close and controversial decision, this second fight is valid for the WBO cruiserweight title. Watch the video and rate this fight!