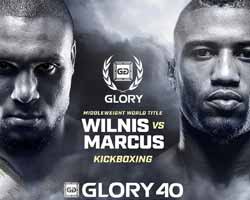 Review by AllTheBestFights.com: 2017-04-29, close and tough fight between Jason Wilnis and Simon Marcus 3: it gets three stars.

The Glory Mw champion Jason Wilnis entered this fight with a professional kickboxing record of 30-6-1 (8 knockouts) and he is ranked as the No.1 cruiserweight in the world. He suffered his last loss when he faced Joe Schilling in 2015 (=Schilling vs Wilnis I), since then he has won five bouts taking revenge on Schilling in their second fight (=Schilling vs Wilnis II) and beating Israel Adesanya in his last one (=Wilnis vs Adesanya).
His opponent, the former Glory Mw and Wbc light-Hw champion Simon Marcus, has an official record of 46-3-2 (26 knockouts) and he entered as the No.2 in the same weight class. He beat Wilnis in their first fight in 2015 (=Marcus vs Wilnis I) but then he was defeated in their rematch in 2016 (4-stars fight, Marcus vs Wilnis II). After this bout Marcus has won over Dustin Jacoby (=Marcus vs Jacoby II) and Wang Shaohua. Simon Marcus vs Jason Wilnis 3, main event of Glory 40, is valid for the Glory middleweight title (Wilnis’ second defense). Watch the video and rate this fight!