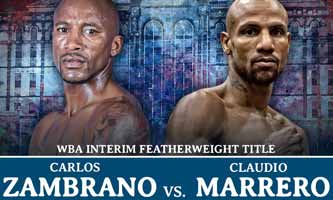 Review by AllTheBestFights.com: 2017-04-29, good start between Carlos Zambrano and Claudio Marrero: it gets three stars.

The undefeated Carlos Zambrano entered this fight with a perfect record of 26-0-0 (11 knockouts) but he is not ranked as he hasn’t fought since August 1, 2015 when he defeated Jose Sanmartin.
His opponent, Claudio Marrero, has a boxing record of 21-1-0 (15 knockouts) and he entered as the No.20 featherweight in the world. He suffered his only loss when he faced Jesus Cuellar in 2013 (=Marrero vs Cuellar), since then he has won seven consecutive bouts defeating Jonathan Arrellano and Luis Hinojosa in 2016. Claudio Marrero vs Carlos Zambrano is valid for the interim WBA and vacant IBO World featherweight titles. Watch the video and rate this fight!