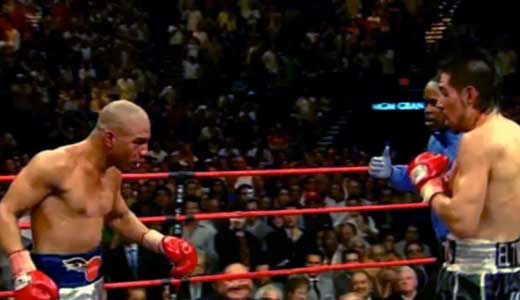 Review: 2008-07-26, Cotto vs Margarito was one of the most exciting fights of 2008. Miguel Angel Cotto (32-0-0) was the favorite because he was still undefeated and defending for the fifth time his WBA World welterweight title. But Antonio Margarito (36-5-0) has always been one of those boxers who all try to avoid, he is a really tough fighter who hits very hard and who absorb any blow, in fact he had never suffered a defeat by ko (only Shane Mosley will win Margarito by ko, but in 2009). Margarito knocked down Cotto two times in the eleventh round and Cotto’s corner stopped the fight. (Wikipedia: Cotto’s loss to Margarito has since come under suspicion due to Margarito’s subsequent attempted use of illegal hand-wraps in a fight against Shane Mosley). Watch the video!

Video:
(This is a free embeddable video hosted on Hbo.com)