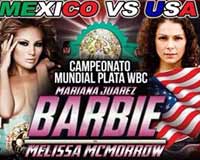 Review: 2014-02-22, fight not so exciting between Mariana Juarez and Melissa McMorrow: it gets two stars. Mariana Juarez entered this fight with a professional boxing record of 38-7-3 (16 knockouts) and she is ranked as the No.2 super flyweight in the world, last year she fought three times losing her first bout against Riyo Togo (=Juarez vs Togo) but in their rematch the Mexican boxer defeated the Japanese (=Juarez vs Togo 2).
Her opponent, Melissa McMorrow, has an official record of 9-3-3 (1 knockout) and she entered as the No.4 flyweight, she is the WBO flyweight champion but in this fight she moved up in weight class to the super flyweight division. ‘Barbie’ Juarez vs McMorrow is valid for the WBC International female super flyweight title (Juarez’s second defense). Watch the video and rate this fight!