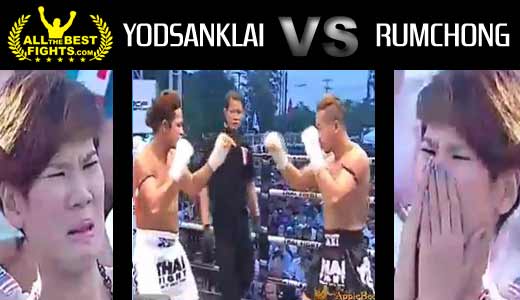 Review: 2014-02-22, if a woman had a similar reaction (look at the picture), probably the fight between Yodsanklai Fairtex and Keo Rumchong was not so friendly…Muay Thai is already one of the toughest sport in the world but if in addition the two fighters don’t use normal boxing gloves and they use just some rope around their hands (like in the ancient muay thai: “Kaad Chuek” or “Kard Chuek” style fight), the bout could be brutal and savage, and it was! Both fighters seem full of rage (look at what Rumchong tried to do when the first round had already finished…) and they exchanged shot for shot, mostly elbows, in one of the craziest and exciting fights we have ever seen: Yodsanklai Fairtex vs Keo Rumchong is a candidate for Fight of the Year 2014 and it gets five stars. Yodsanklai Fairtex entered this fight with a professional kickboxing record of 188-71-4 and he is ranked as the No.3 middleweight in the world while his opponent, Keo Rumchong from Cambodia, has an official record of 86-8-5. Yodsanklai comes off 11 consecutive wins after having suffered his last defeat in 2011 when he faced Artur Kyshenko (=Kyshenko vs Fairtex, fight rated 4 stars). Watch the video and rate this fight!