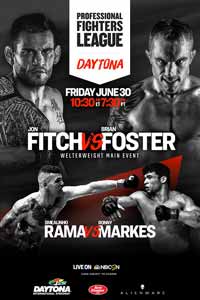 Review by AllTheBestFights.com: 2017-06-30, boring fight between Smealinho Rama and Ronny Markes: it gets one star.

Smealinho Rama entered this fight with a pro mma record of 10-2-0 (90% finishing rate) and he is ranked as the No.41 light heavyweight in the world. He lost to Blagoi Ivanov in 2015 (=Rama vs Ivanov) but he came back to win in 2016 against Jake Heun.
His opponent, the black belt in Brazilian jiu-jitsu Ronny Markes, has a record of 16-5-0 (62% finishing rate) and he entered as the No.80 in the same weight class. He has already fought twice in 2017 beating Tony Lopez and losing to Viktor Nemkov (=Nemkov vs Markes). Ronny Markes vs Smealinho Rama is on the undercard of Jon Fitch vs Brian Foster – PFL Daytona (Professional Fighters League). Watch the video and rate this fight!