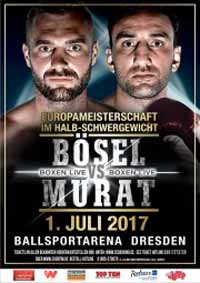 Review by AllTheBestFights.com: 2017-07-01, nice and tough exchanges between Dominic Boesel and Karo Murat: it gets three stars.

The undefeated Dominic Boesel entered this fight with a perfect boxing record of 24-0-0 (9 knockouts) and he is ranked as the No.17 light heavyweight in the world. In his last three fights he has beat Denis Liebau (=Boesel vs Liebau), Tony Averlant and Sami Enbom.
His opponent, Karo Murat, has a record of 30-3-1 (19 knockouts) and he entered as the No.41 in the same weight class. He lost to Sullivan Barrera in 2015 (=Barrera vs Murat) but then he has won over Aleksandar Todorovic, Esteban Hillman Tababary and Yevgeni Makhteienko. Karo Murat vs Dominic Boesel is valid for the vacant EBU (European) light heavyweight title. Watch the video and rate this fight!