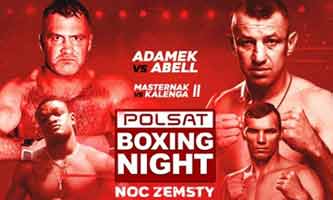 Review by AllTheBestFights.com: 2018-04-21, pretty good fight between Mateusz Masternak and Youri Kalenga 2: it gets three stars.

Mateusz Masternak entered this fight with a professional boxing record of 40-4-0 (27 knockouts) and he is ranked as the No.22 cruiserweight in the world. He lost to Tony Bellew in 2015 (Bellew vs Masternak) but then he has won four bouts winning over Alexander Kubich, Ismayl Sillah (Mateusz Masternak vs Ismayl Sillah) and Stivens Bujaj in 2017.
His opponent, Youri Kayembre Kalenga, has an official record of 23-4-0 (16 knockouts) and he entered as the No.28 in the same weight class. He fought twice last year defeating Adam Gadajew and losing to Kevin Lerena (Kevin Lerena vs Youri Kayembre Kalenga). In their first fight Masternak had lost to Kalenga via split decision (June 21, 2014 – Mateusz Masternak vs Youri Kalenga I); this second bout is valid for the vacant WBO European cruiserweight title and it is on the undercard of Tomasz Adamek vs Joey Abell. Watch the video and rate this fight!

(Free embeddable video hosted on Youtube and not uploaded by AllTheBestFights)
https://www.youtube.com/watch?v=scEw_S3O4sg