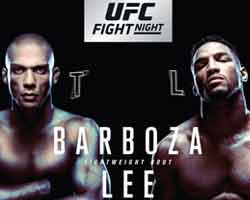 Review by AllTheBestFights.com: 2018-04-21, good fight between Edson Barboza and Kevin Lee: it gets three stars.

The black belt in tae-kwon-do Edson Barboza entered this fight with a professional mma record of 19-5-0 (63% finishing rate) and he is ranked as the No.5 lightweight in the world. He fought twice last year beating Beneil Dariush (4-stars fight, Barboza vs Dariush) and losing with current #1 Ufc Lw champ Khabib Nurmagomedov (Khabib Nurmagomedov vs Edson Barboza).
His opponent, Kevin Lee, has an official record of 16-3-0 (56% finishing rate) and he entered as the No.7 in the same weight class. He fought three times in 2017 defeating Francisco Trinaldo (Trinaldo vs Lee) and Michael Chiesa (Chiesa vs Lee) but then he lost to Tony Ferguson (Tony Ferguson vs Kevin Lee). Barboza vs Lee is the main event of UFC Fight Night 128 (Lee weighed in at 157 pounds, one pound over the lightweight non-title fight upper limit). Watch the video and rate this fight!

(Free embeddable video hosted on Youtube and not uploaded by AllTheBestFights)
https://www.youtube.com/watch?v=lmqLUirMiMo