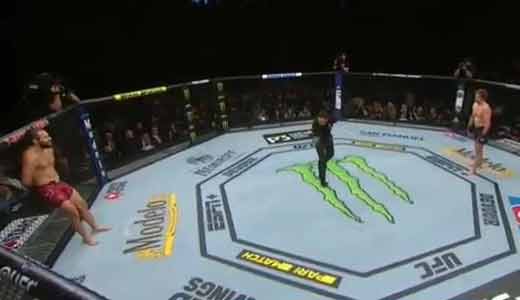 Review by AllTheBestFights.com: 2019-07-06, spectacular finish between Ben Askren and Jorge Masvidal: this is one of the best mma fights of the year 2019 and it gets four stars (UFC Performance of the Night).

The undefeated former Bellator Ww and ONE FC champ Ben Askren entered this fight with a perfect mma record of 19-0-0 (63% finishing rate) and he is ranked as the No.12 welterweight in the world (currently the #1 in this division is Kamaru Usman). In his last three fights he has won over Zebaztian Kadestam (Askren vs Kadestam), Shinya Aoki (Ben Askren vs Shinya Aoki) and Robbie Lawler (Robbie Lawler vs Ben Askren).
His opponent, Jorge Masvidal, has an official record of 33-13-0 (48% finishing rate) and he entered as the No.4 in the same weight class. He lost two consecutive bouts in 2017, against Demian Maia (via split decision, Maia vs Masvidal) and Stephen Thompson (Stephen Thompson vs Jorge Masvidal), but then he has beat Darren Till (Darren Till vs Jorge Masvidal). Askren vs Masvidal is on the undercard of Jon Jones vs Thiago Santos – UFC 239. Watch the video and rate this fight!