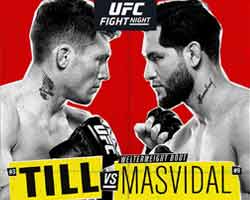 Review by AllTheBestFights.com: 2019-03-16, great fight between Darren Till and Jorge Masvidal: it is close to get four stars (UFC Fight of the Night, UFC Performance of the Night).

Darren Till entered this fight with a professional mma record of 17-1-1 (71% finishing rate) and he is ranked as the No.4 welterweight in the world (currently the #1 in this division is Kamaru Usman). He fought twice last year beating Stephen Thompson (Stephen Thompson vs Darren Till) and suffering his first loss, against former #1 Ufc champion Tyron Woodley (Tyron Woodley vs Darren Till).
His opponent, Jorge Masvidal, has an official record of 32-13-0 (47% finishing rate) but he is not ranked as he hasn’t fought since November 4, 2017 when he was defeated by Stephen Thompson (Stephen Thompson vs Jorge Masvidal); before this bout, in 2017, he had also lost to Demian Maia in May (via split decision, Maia vs Masvidal) and he had beat Donald Cerrone in January (Cerrone vs Masvidal). Till vs Masvidal is the main event of UFC Fight Night 147 (UFC on ESPN+ 5). Watch the video and rate this fight!

Result: Click here to show the fight’s result
Jorge Masvidal def. Darren Till (KO at 3:05, round 2)

Till’s next fight: Kelvin Gastelum vs Darren Till

Till vs Masvidal Fight Video: