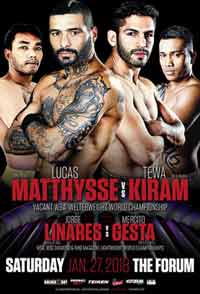 Review by AllTheBestFights.com: 2018-01-27, pretty good finish between Lucas Matthysse and Tewa Kiram but it is not enough to get three stars: it gets two.

The former Wbc super-Lw champion Lucas Martin Matthysse entered this fight with a professional boxing record of 38-4-0 (35 KOs=92%) and he is ranked as the No.18 welterweight in the world. He had fought twice in 2015 winning over Ruslan Provodnikov (=Matthysse vs Provodnikov) and losing to Viktor Postol (=Matthysse vs Postol); after this fight he fought just once, in 2017, beating Emmanuel Taylor (=Matthysse vs Taylor).
His opponent, the undefeated Tewa Kiram (also known as Teerachai Kratingdaenggym), has a perfect record of 38-0-0 (28 knockouts) and he entered as the No.66 in the same weight class. He fought twice last year defeating Vijender Kumar and Ramadhani Shauri. Matthysse vs Kiram is valid for the vacant WBA World welterweight title. Watch the video and rate this fight!