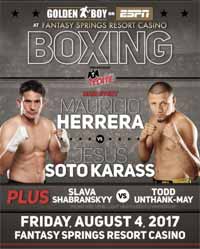 Review by AllTheBestFights.com: 2017-08-04, good fight between Mauricio Herrera and Jesus Soto Karass: it gets three stars.

Mauricio Herrera entered this fight with a professional record of 23-7-0 (7 knockouts) and he is ranked as the No.61 welterweight in the world but he lost two out of his last three bouts, against Frankie Gomez (=Herrera vs Gomez) and Pablo Cesar Cano (=Herrera vs Cano); after this fight he has beat Hector Velazquez.
His opponent, Jesus Soto Karass, has a boxing record of 28-11-4 (18 knockouts) and he entered as the No.77 super welterweight but he lost three out of his last four fights, the last one with Yoshihiro Kamegai (=Soto Karass vs Kamegai II); before this bout he drew with Kamegai in their first clash (=Soto Karass vs Kamegai I). Mauricio Herrera vs Jesus Soto Karass is the main event of the evening. Watch the video and rate this fight!