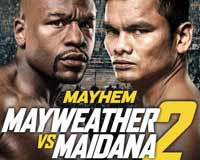 Review: 2014-09-13, disappointing bout between Floyd Mayweather Jr and Marcos Maidana: their second fight gets two stars. The undefeated Floyd Mayweather Jr entered this fight with a perfect record of 46-0-0 (26 knockouts) and he is ranked as the No.1 welterweight in the world, he has won world titles in five different weight classes and he has fought once this year beating Maidana in their first bout (=Mayweather vs Maidana I) but it was a close and controversial fight… Before this bout he had won against then-undefeated Saul ‘Canelo’ Alvarez in a bout valid for the Wbc and Wba Super World light middleweight titles (=Mayweather vs Alvarez).
His opponent, Marcos Rene Maidana, has an official record of 35-4-0 (31 KOs=88%) and he entered as the No.4 in the same weight class, he is 31 years old, six years younger than ‘Money’ Mayweather and he has won world titles in two different weight classes. Mayweather vs Maidana 2 is valid for the WBC and WBA Super World welterweight + WBC light middleweight title. Watch the video and rate this fight!