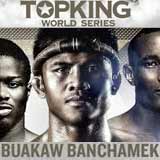 Review: 2014-09-13, pretty good fight between Buakaw Banchamek and Zhang Chunyu: it gets three stars. Buakaw Banchamek, formerly known as Buakaw Por Pramuk, entered this fight with a professional kickboxing record of 218-21-12 (57 knockouts) and he is ranked as the No.1 super welterweight in the world while his opponent, Zhang Chunyu, has an official record of 37-12-6. Buakaw suffered his last defeat in 2009 when he faced Andy Souwer in the semifinal of the K-1 World Max, since then he has collected 31 consecutive wins! He has already fought five times in 2014 beating in his last bout Abdoul Toure in their rematch (=Buakaw vs Toure 2). Buakaw vs Chunyu is the eighth-final of the Top King World Series 70 kg tournament – TK1 Belarus. Watch the video and rate this fight!