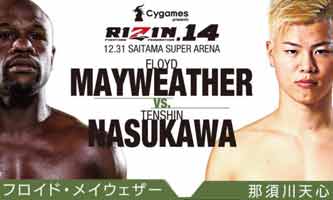 Review by AllTheBestFights.com: 2018-12-31, Floyd Mayweather Jr vs Tenshin Nasukawa was only an exhibition fight and we prefer not to rate such a bad show…

The undefeated former Olympian and former world champion in five different weight classes Floyd Mayweather Jr entered this fight with a perfect boxing record of 50-0-0 (27 knockouts) but he is not ranked as he hasn’t fought since August 26, 2017 when he defeated Conor McGregor (Floyd Mayweather Jr vs Conor McGregor). Before this bout, in 2015, ‘Money’ Mayweather had beat Manny Pacquiao (Mayweather vs Pacquiao) and Andre Berto (Mayweather vs Berto).
His opponent, the undefeated black belt in karate and former ISKA world champion Tenshin Nasukawa, has a perfect kickboxing record of 28-0-0 (22 KOs=79% but he has also a mma record of 4-0-0) and he entered as the No.5 featherweight (in kickboxing/K-1 rules). He has already fought five times in 2018 beating Rodtang Jitmuangnon, Kyoji Horiguchi and Taiki Naito in his last three. Nasukawa is just 20 years old, 21 years younger than Floyd but the Japanese is 5 ft 5 in tall (165 cm) while Mayweather is 5 ft 8 in tall (173 cm). Mayweather vs Nasukawa is a 3-round exhibition boxing match (but fighters allowed to use their full strength) and it is the main event of Rizin 14. Watch the video and rate this fight!