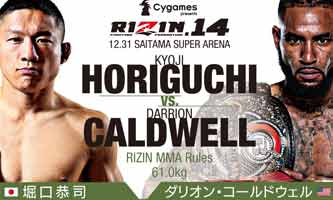 Review by AllTheBestFights.com: 2018-12-31, good fight between Darrion Caldwell and Kyoji Horiguchi: it gets three stars.

The Bellator Bw champion Darrion Caldwell entered this fight with a professional mma record of 13-1-0 (54% finishing rate) and he is ranked as the No.4 bantamweight in the world (currently the #1 in this division is TJ Dillashaw). He suffered his only loss when he faced Joe Taimanglo in 2016 (Caldwell vs Taimanglo I) but then he took revenge on him (Taimanglo vs Caldwell II); after this bout he has won three fights beating Noad Lahat in his last one (Darrion Caldwell vs Noad Lahat).
His opponent, the black belt in karate Kyoji Horiguchi, has an official record of 25-2-0 (60% finishing rate) and he entered as the No.9 in the same weight class. He suffered his last loss when he faced former Ufc Flw champion Demetrious Johnson in 2015 (Johnson vs Horiguchi), since then he has won ten consecutive bouts beating Ian McCall and Hiromasa Ogikubo in 2018. Caldwell vs Horiguchi is valid for the inaugural Rizin bantamweight title; undercard of Floyd Mayweather Jr vs Tenshin Nasukawa – Rizin 14. Watch the video and rate this fight!