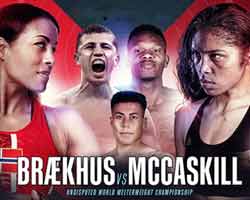 Review by AllTheBestFights.com: 2020-08-15, good fight between Cecilia Braekhus and Jessica McCaskill: it gets three stars.
The undefeated IBF, IBO, WBA, WBC and WBO champion Cecilia Braekhus entered this fight with a perfect record of 36-0-0 (9 knockouts) and she is ranked as the No.1 women’s welterweight in the world. In her last three bouts she has won over Inna Sagaydakovskaya, Aleksandra Magdziak Lopes (Cecilia Braekhus vs Aleksandra Magdziak Lopes) and Victoria Noelia Bustos.
Her opponent, Jessica McCaskill, has an official boxing record of 8-2-0 (3 knockouts) and she entered as the No.1 women’s super lightweight. She lost to Katie Taylor in 2017 but then she has beat twice Erica Anabella Farias and once Anahi Ester Sanchez. McCaskill vs Braekhus is valid for the WBC, WBA, IBF, WBO, IBO World Female welterweight titles. Watch the video and rate this fight!

Their next fight: Jessica McCaskill vs Cecilia Braekhus 2