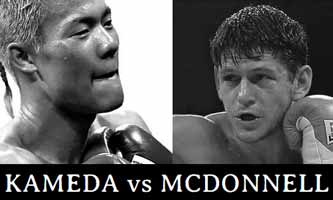 Review by AllTheBestFights.com: 2015-05-09, nice and close fight between Tomoki Kameda and Jamie McDonnell: it gets three stars.

The undefeated Tomoki Kameda entered this fight with a perfect boxing record of 31-0-0 (19 knockouts) and he is ranked as the No.3 bantamweight in the world (currently the #1 in this division is Shinsuke Yamanaka). He fought twice last year beating Pungluang Sor Singyu and Alejandro Hernandez (=Kameda vs Hernandez).
His opponent, the former Ibf Bw champion Jamie McDonnell, has a record of 25-2-1 (12 knockouts) and he entered as the No.13 in the same weight class. He won the vacant Wba Bw belt last year, against Tabtimdaeng Na Rachawat (=McDonnell vs Rachawat) and then he successfully defended it once with Javier Nicolas Chacon (=McDonnell vs Chacon). ‘El Mexicanito’ Kameda vs McDonnell is valid for the WBA World bantamweight title (held by McDonnell); undercard of Omar Figueroa Jr vs Ricky Burns. Watch the video and rate this fight!