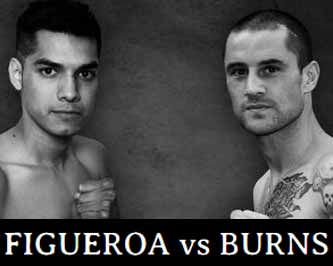 The undefeated Omar Figueroa Jr entered this fight with a pro boxing record of 24-0-1 (18 KOs=75%) and he is ranked as the No.4 lightweight in the world (currently the #1 in this division is Mickey Bey). He won the interim Wbc Lw title in 2013 beating Nihito Arakawa (Fight of the Year candidate, Figueroa vs Arakawa) and then he defended his belt twice, against Jerry Belmontes (=Figueroa vs Belmontes) and Daniel Estrada (=Figueroa vs Estrada).
His opponent, the former Wbo super-Fw and Lw world champion Ricky Burns, has an official record of 37-4-1 (11 knockouts) and he entered as the No.16 super lightweight but he won just one out of his last four bouts, against Alexandre Lepelley (=Burns vs Lepelley). Before this fight he had drawn with Raymundo Beltran in 2013 (Burns vs Beltran) and then he lost twice in 2014, against Terence Crawford (=Burns vs Crawford) and Dejan Zlaticanin (=Burns vs Zlaticanin). Figueroa vs Burns is the main event of the evening. Watch the video and rate this fight!