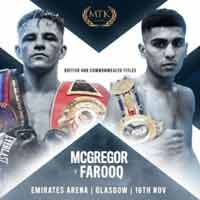 Review by AllTheBestFights.com: 2019-11-16, too much holding and too many interruptions between Lee McGregor and Ukashir Farooq: it gets two stars.

Both undefeated, the 2017 AIBA world championships participant Lee McGregor entered this fight with a perfect boxing record of 7-0-0 (6 KOs=86%) and he is ranked as the No.100 bantamweight in the world while his opponent, Ukashir Farooq, has an official record of 13-0-0 (6 knockouts) and he entered as the No.66 in the same weight class. In their last three bouts McGregor has won over Thomas Essomba, Brett Fidoe and Scott Allan while Farooq has beat Iain Butcher, Kyle Williams and Duane Winters. McGregor vs Farooq is valid for the Commonwealth (British Empire) and BBBofC British bantamweight titles. Watch the video and rate this fight!