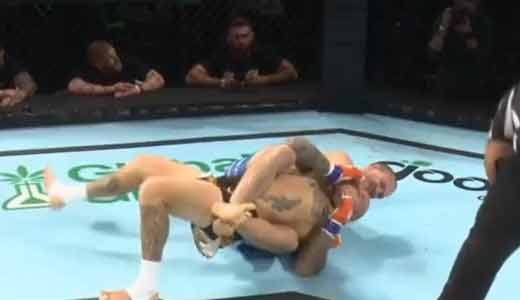 Review by AllTheBestFights.com: 2019-11-16, spectacular finish between Ross Pearson and Davy Gallon: this is one of the best mma fights of the year 2019 and it gets four stars!

The Tuf 9 tournament winner Ross Pearson entered this fight with a professional mma record of 20-16-0 (60% finishing rate) and he is ranked as the No.112 lightweight in the world but he comes off two consecutive defeats, against John Makdessi and Desmond Green; before this bout he had beat Mizuto Hirota.
His opponent, Davy Gallon, has an official record of 17-7-2 (59% finishing rate) and he entered as the No.249 welterweight. In his last three bouts he has lost to Abner Lloveras and Daniel Skibinski but then he has defeated Sydney Machado. Pearson vs Gallon is the main event of the Probellum 1. Watch the video and rate this fight!