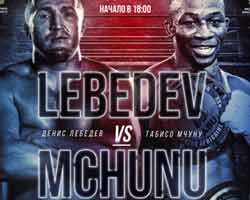 Review by AllTheBestFights.com: 2019-12-21, fight not so exciting between Denis Lebedev and Thabiso Mchunu: it gets two stars.

The former Ibf and Wba champion Denis Lebedev entered this fight with a pro record of 32-2-0 (23 knockouts) and he is ranked as the No.9 cruiserweight in the world (currently the #1 in this division is Mairis Briedis). He lost to Murat Gassiev in 2016 (Denis Lebedev vs Murat Gassiev) but then he has won three bouts defeating Mike Wilson in his last one (Denis Lebedev vs Mike Wilson).
His opponent, Thabiso Mchunu, has an official boxing record of 21-5-0 (13 knockouts) and he entered as the No.7 in the same weight class. He was defeated by Thomas Oosthuizen in September 2018 (Thabiso Mchunu vs Thomas Oosthuizen) but after three months he took revenge on him and he also beat Willbeforce Shihepo in 2019. Lebedev vs Mchunu is valid for the vacant WBC Silver cruiserweight title. Watch the video and rate this fight!