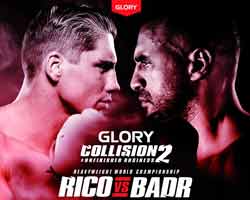 Review by AllTheBestFights.com: 2019-12-21, nice and tough exchanges between Rico Verhoeven and Badr Hari 2: it gets three stars.

The Glory Hw champion Rico Verhoeven entered this fight with a professional kickboxing record of 55-10-0 (16 knockouts) and he is ranked as the No.1 heavyweight in the world. He lost to Andrei Herasimchuk in 2015 (Verhoeven vs Herasimchuk) but then he has won eleven consecutive fights beating Mladen Brestovac (Rico Verhoeven vs Mladen Brestovac 2) and Guto Inocente in 2018 (Rico Verhoeven vs Guto Inocente).
His opponent, the former K-1 world champion Badr Hari, has an official record of 106-13-0 (92 KOs=87%) but he is not ranked as he hasn’t fought since March 3, 2018 when he faced Hesdy Gerges but the bout ended in a no-contest (originally a decision win for Badr but then changed since both fighters tested positive for performance-enhancing drugs, Badr Hari vs Hesdy Gerges 2). Before this bout he was defeated by Rico Verhoeven in their first fight in 2016 (arm injury, Rico Verhoeven vs Badr Hari) and he had beat Ismael Londt in 2015 (Hari vs Londt). Verhoeven vs Hari 2, main event of Glory Collision 2 (or Glory 74: Arnhem), is valid for the Glory heavyweight title. Watch the video and rate this fight!