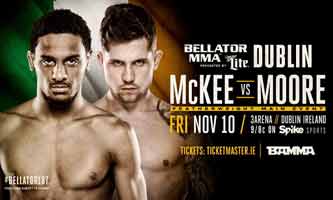 Review by AllTheBestFights.com: 2017-11-10, pretty good finish between AJ McKee and Brian Moore but the rest of the fight was not so exciting: it gets two stars.

The undefeated AJ McKee entered this fight with a perfect mma record of 9-0-0 (67% finishing rate) and he is ranked as the No.56 featherweight in the world while his opponent, Brian Moore, has an official record of 10-5-0 (80% finishing rate). McKee has already fought three times in 2017 winning over Brandon Phillips, Dominic Mazzotta and Blair Tugman while Moore has fought once beating Michal Horejsi; before this bout, in 2016, he had lost to Daniel Weichel (=Weichel vs Moore). McKee vs Moore is the main event of Bellator 187. Watch the video and rate this fight!