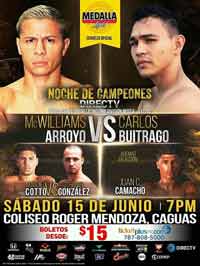 Review by AllTheBestFights.com: 2019-06-15, some good exchanges between McWilliams Arroyo and Carlos Buitrago but it is not enough to get three stars: it gets two.

The former Olympian and 2009 world amateur boxing champion McWilliams Arroyo entered this fight with a pro boxing record of 18-4-0 (14 KOs=78%) and he is ranked as the No.6 flyweight in the world (currently the #1 in this division is Kosei Tanaka). He lost to Kazuto Ioka last year (Kazuto Ioka vs McWilliams Arroyo) but he came back to win in 2019 against Carlos Maldonado.
His opponent, the former interim Wbo champion Carlos Buitrago, has a record of 31-4-1 (17 knockouts) and he entered as the No.39 in the same weight class. He lost two consecutive bouts between 2017 and 2018, against Hiroto Kyoguchi (Hiroto Kyoguchi vs Carlos Buitrago) and Angel Acosta (Angel Acosta vs Carlos Buitrago), but then he has beat Gilmer Baules. Arroyo vs Buitrago is valid for the WBO Latino flyweight title. Watch the video and rate this fight!