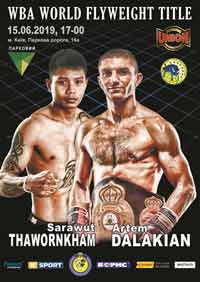 Review by AllTheBestFights.com: 2019-06-15, some good single shots between Artem Dalakian and Sarawut Thawornkham but it is not enough to get three stars: it gets two.

The undefeated Wba Flw champion Artem Dalakian entered this fight with a pro boxing record of 18-0-0 (13 knockouts) and he is ranked as the No.4 flyweight in the world (currently the #1 in this division is Kosei Tanaka). In his last three bouts he has won over Brian Viloria (Brian Viloria vs Artem Dalakian), Yodmongkol Vor Saengthep (also known as Sirichai Thaiyen, Artem Dalakian vs Yodmongkol Vor Saengthep) and Gregorio Lebron (Artem Dalakian vs Gregorio Lebron).
His opponent, Sarawut Thawornkham, has a record of 20-1-0 (15 KOs=75%) and he entered as the No.75 in the same weight class. He suffered his only loss when he faced Masato Morisaki at his pro boxing debut, since then he has won 20 consecutive fights defeating Crison Omayao in his last one. Dalakian vs Thawornkham is valid for the WBA World flyweight title (Dalakian’s third defense). Watch the video and rate this fight!