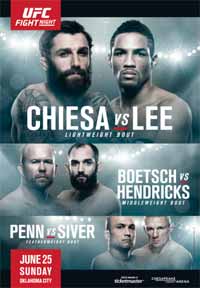 Review by AllTheBestFights.com: 2017-06-25, some good exchanges between Tim Means and Alex Garcia but it is not enough to get three stars: it gets two.

Tim Means entered this fight with a mma record of 26-8-1 (85% finishing rate) and he is ranked as the No.33 welterweight in the world but he comes off the loss against Alex Oliveira (=Means vs Oliveira 2).
His opponent, Alex Garcia, has an official record of 14-3-0 (79% finishing rate) and he entered as the No.89 in the same weight class. He fought twice last year losing to Sean Strickland and beating Mike Pyle. Tim Means vs Alex Garcia is on the undercard of Michael Chiesa vs Kevin Lee – UFC Fight Night 112. Watch the video and rate this fight!