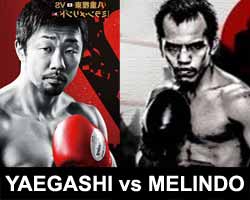 Review by AllTheBestFights.com: 2017-05-21, good start between Akira Yaegashi and Milan Melindo: it gets three stars.

The world champion in three different weight classes Akira Yaegashi entered this fight with a pro boxing record of 25-5-0 (13 knockouts) and he is ranked as the No.4 light flyweight in the world (currently the #1 in this division is Ganigan Lopez). He lost two consecutive bouts in 2014, against Roman Gonzalez (=Yaegashi vs Gonzalez) and Pedro Guevara (=Yaegashi vs Guevara), but then he has won five fights defeating Martin Tecuapetla (=Yaegashi vs Tecuapetla) and Samartlek Kokietgym in 2016 (=Yaegashi vs Samartlek).
His opponent, the interim Ibf champion Milan Melindo, has a record of 35-2-0 (12 knockouts) and he entered as the No.12 in the same weight class. He lost to Javier Mendoza in 2015 (=Melindo vs Mendoza), but then he has won over Victor Emanuel Olivo (=Melindo vs Olivo) Maximino Flores and Fahlan Sakkreerin Jr (=Melindo vs Sakkreerin Jr). Milan Melindo vs Akira Yaegashi is valid for the IBF World light flyweight title; undercard of Naoya Inoue vs Ricardo Rodriguez. Watch the video and rate this fight!