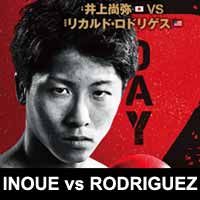 Review by AllTheBestFights.com: 2017-05-21, pretty good finish between Naoya Inoue and Ricardo Rodriguez but it is not enough to get three stars: it gets two.

The undefeated world champion in two different weight classes Naoya Inoue entered this fight with a perfect boxing record of 12-0-0 (10 KOs=83%) and he is ranked as the No.3 super flyweight in the world (currently the #1 in this division is Srisaket Sor Rungvisai). He fought three times last year winning over David Carmona (=Inoue vs Carmona), Karoon Jarupianlerd (=Inoue vs Jarupianlerd) and Kohei Kono (=Inoue vs Kono).
His opponent, Ricardo Rodriguez, has an official record of 16-3-0 (5 knockouts) and he entered as the No.26 in the same weight class. ‘Meserito’ Rodriguez lost to David Carmona in 2015 (via split decision, Carmona vs Rodriguez 2) but then he has won four bouts beating Carlos Narvaez in his last one. Naoya Inoue vs Ricardo Rodriguez is valid for the WBO World super flyweight title (held by Inoue). Watch the video and rate this fight!