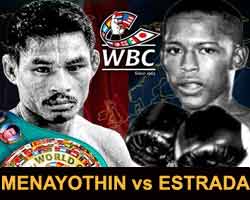 Review by AllTheBestFights.com: 2018-05-02, pretty good fight between Wanheng Menayothin and Leroy Estrada: it gets three stars.

The undefeated Wbc champion Wanheng Menayothin (also known as Chayaphon Moonsri) entered this fight with a perfect boxing record of 49-0-0 (17 knockouts) and he is ranked as the No.2 minimumweight in the world (currently the #1 in this division is Knockout CP Freshmart). He fought five times in 2017 beating Melvin Jerusalem (Menayothin vs Jerusalem), Jaysever Abcede, Omari Kimweri (Menayothin vs Kimweri), Jack Amisa and Tatsuya Fukuhara (Wanheng Menayothin vs Tatsuya Fukuhara); If Wanheng Menayothin beats Leroy Estrada, he will break Rocky Marciano’s record of 49-0 (also beat by Floyd Mayweather Jr in the fight/show against Conor McGregor – Floyd Mayweather Jr vs Conor McGregor).
His opponent, Leroy Estrada, has an official record of 16-2-0 (6 knockouts) and he entered as the No.3 in the same weight class. He suffered his last loss when he faced Carlos Ortega in 2014, since then he has won four consecutive fights beating Saul Juarez in 2017 (Saul Juarez vs Leroy Estrada). Menayothin vs Estrada is valid for the WBC World minimumweight title (Menayothin’s nineth defense). Watch the video and rate this fight!