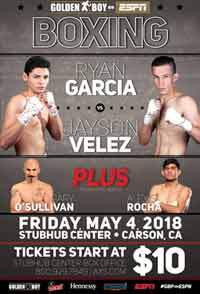 Review by AllTheBestFights.com: 2018-05-04, some good exchanges between Ryan Garcia and Jayson Velez but it is not enough to get three stars: it gets two.

The 19-year-old Ryan Garcia (11 years younger than Velez) entered this fight with a perfect record of 14-0-0 (13 KOs=93%) and he is ranked as the No.47 super featherweight in the world. In his last three bouts he has won over Cesar Alan Valenzuela, Noe Martinez Raygoza and Fernando Vargas.
His opponent, Jayson Velez, has a record of 26-4-1 (18 knockouts) and he entered as the No.31 in the same weight class. He lost four consecutive fights between 2015 and 2016, but then he has beat Alberto Mercado, Giovanni Caro and Juan Manuel Lopez (Juan Manuel Lopez vs Jayson Velez). Garcia vs Velez is the main event of the evening. Watch the video and rate this fight!