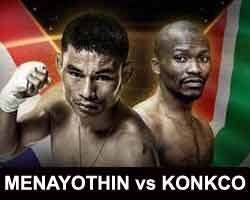 Review by AllTheBestFights.com: 2019-10-25, pretty good fight between Wanheng Menayothin and Simpiwe Konkco: it gets three stars.

The undefeated Wbc champion Wanheng Menayothin (also known as Chayaphon Moonsri) entered this fight with a perfect boxing record of 53-0-0 (18 knockouts) and he is ranked as the No.1 minimumweight in the world. In his last three bouts he has won over Pedro Taduran (Wanheng Menayothin vs Pedro Taduran), Mektison Marganti and Tatsuya Fukuhara (Wanheng Menayothin vs Tatsuya Fukuhara 2).
His opponent, the former Ibo champ Simpiwe Konkco, has a record of 19-5-0 (7 knockouts) and he entered as the No.4 in the same weight class. He lost to Hekkie Budler in 2015 but since then he has collected four victories and one no-contest, against Joey Canoy in December 2018. Menayothin vs Konkco is valid for the WBC World minimumweight title (Menayothin’s twelfth defense). Watch the video and rate this fight!