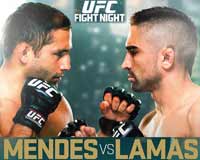 Review by AllTheBestFights.com: 2015-04-04, some good shots between Chad Mendes and Ricardo Lamas but it is not enough to get three stars: it gets two (UFC Performance of the Night).

Chad Mendes entered this fight with a professional mma record of 16-2-0 (50% finishing rate) and he is ranked as the No.4 featherweight in the world; both his two defeats occurred against #1 Ufc Fw champion Jose Aldo: the first time he lost by ko in just one round (in 2012, Aldo vs Mendes I) while in the second bout he lost by unanimous decision (at the end of 2014, Aldo vs Mendes II).
His opponent, the black belt in Brazilian jiu-jitsu Ricardo Lamas, has an official record of 15-3-0 (53% finishing rate) and he entered as the No.5 in the same weight class; he lost to Jose Aldo in 2014 as well (by unanimous decision, Aldo vs Lamas), but then he came back to win beating Hacran Dias (=Lamas vs Dias) and Dennis Bermudez (=Bermudez vs Lamas). Mendes vs Lamas is the main event of the UFC Fight Night 63. Watch the video and rate this fight!