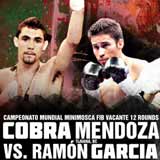 Review: 2014-09-20, good fight between Javier Mendoza and Ramon Garcia Hirales: it gets three stars. Ramon Garcia Hirales entered this fight with a pro boxing record of 20-4-1 (12 knockouts) and he is ranked as the No.8 light flyweight in the world (currently the #1 in this division is Naoya Inoue); he suffered two consecutive defeats between 2011 and 2012, against Donnie Nietes and Roman Gonzalez (both valid for world titles), since then he has fought and won four times.
His opponent, Javier Mendoza, has an official record of 21-2-1 (18 KOs=85%) but he is not ranked as he hasn’t fought since June 7, 2013 when he defeated Ricardo Armenta. Mendoza vs Garcia Hirales is valid for the vacant IBF World light flyweight title; undercard of Orlando Salido vs Terdsak Kokietgym. Watch the video and rate this fight!