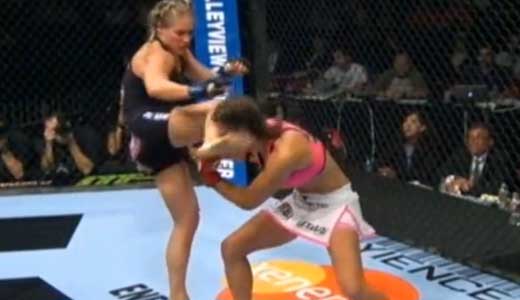 Review: 2012-08-18, exciting non-stop action fight with some great exchanges, excellent work on the ground and spectacular ending with a great high kick… Miesha Tate vs Julie Kedzie is one of the best mma fights of the year (close to five stars). Miesha Tate (12-3-0) entered as the No.4 bantamweight (women) in the world while Julie Kedzie (16-10-0) entered as the No.15. Tate vs Kedzie is on the undercard of Ronda Rousey vs Sarah Kaufman (Strikeforce). Watch the video!