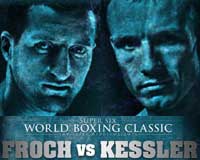 Review: 2010-04-24, even though, for us, it was not a candidate for fight of the year 2010, the first fight between Mikkel Kessler and Carl Froch can be considered a classic, however, it was very close to get four stars thanks to a great performance by both boxers, some tough exchanges and an exciting ending! The undefeated Carl Froch entered the fight with a record of 26-0-0 (20 knockouts) while Mikkel Kessler had a record of 42-2-0 (32 knockouts). Kessler vs Froch was valid for the WBC super middleweight title (Froch’s third defense) but it was also scheduled for the Super Six World Boxing Classic: super middleweight boxing tournament won by Andre Ward. The rematch Froch vs Kessler II is scheduled to take place May 25, 2013 at the O2 Arena in London (while their first fight was held in Denmark, homeland of Kessler). Watch the video!