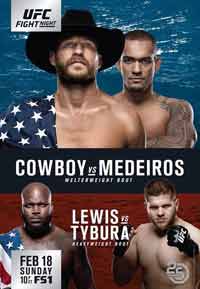 Review by AllTheBestFights.com: 2018-02-18, good finish between Thiago Alves and Curtis Millender: it gets three stars (UFC Performance of the Night).

Thiago Alves entered this fight with a professional mma record of 22-11-0 (64% finishing rate) and he is ranked as the No.28 welterweight in the world. ‘Pitbull’ Alves lost two consecutive bouts between 2015 and 2016, against Carlos Condit (Carlos Condit vs Thiago Alves) and Jim Miller but he came back to win in 2017 with Patrick Cote (Patrick Cote vs Thiago Alves).
His opponent, Curtis Millender, has a record of 14-3-0 (36% ko/tko victory rate – he has never won via submission) and he entered as the No.80 in the same weight class. He suffered his last loss when he faced Eddie Mendez in 2015 but since then he has collected six victories beating Nick Barnes in 2018. Millender vs Alves is on the undercard of Donald Cerrone vs Yancy Medeiros – UFC Fight Night 126. Watch the video and rate this fight!

(Free embeddable video hosted on Youtube and not uploaded by AllTheBestFights)
https://www.youtube.com/watch?v=37ivHnnnHjM