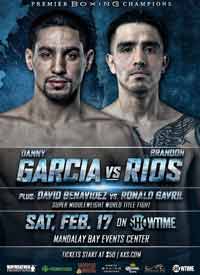 Review by AllTheBestFights.com: 2018-02-17, pretty good finish but the rest of the fight was not so exciting: Yordenis Ugas vs Ray Robinson gets two stars.

The olympian Yordenis Ugas entered this fight with a boxing record of 20-3-0 (9 knockouts) and he is ranked as the No.22 welterweight in the world. He suffered two consecutive losses in 2014, against Emmanuel Robles and Amir Imam but since then he has won five bouts beating Levan Ghvamichava, Nelson Lara and Thomas Dulorme in 2017 (Thomas Dulorme vs Yordenis Ugas).
His opponent, Ray Robinson, has an official record of 24-2-0 (12 knockouts) and he entered as the No.49 in the same weight class. He lost two consecutive bouts between 2009 and 2010, against Brad Solomon and Shawn Porter, but since then he has collected 13 consecutive fights defeating Edwin Palacios, Claudinei Lacerda and Breidis Prescott in 2017. Ugas vs Robinson is on the undercard of Danny Garcia vs Brandon Rios. Watch the video and rate this fight!