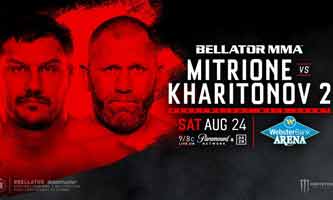 Review by AllTheBestFights.com: 2019-08-24, one sided fight between Vitaly Minakov and Timothy Johnson: it gets two stars.

The black belt in judo, former Bellator and world combat sambo champion Vitaly Minakov entered this fight with a pro mma record of 21-1-0 (90% finishing rate) and he is ranked as the No.25 heavyweight in the world but he comes off his first loss, suffered against Cheick Kongo in their rematch (Vitaly Minakov vs Cheick Kongo 2); before this bout, in 2017, he had beat Tony Johnson (Vitaly Minakov vs Tony Johnson).
His opponent, Timothy Johnson (who replaces Javy Ayala), has a record of 12-5-0 (75% finishing rate) and he entered as the No.50 in the same weight class but he won just three out of his last seven bouts. He fought twice last year beating Marcelo Golm (Timothy Johnson vs Marcelo Golm) and losing to Cheick Kongo (Cheick Kongo vs Timothy Johnson). Minakov vs Johnson is on the undercard of Matt Mitrione vs Sergei Kharitonov 2 – Bellator 225. Watch the video and rate this fight!