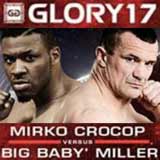 Review: 2014-06-21, tough fight but not particularly exciting: the second fight between Mirko Filipovic and Jarrell Miller gets two stars. Mirko “Cro Cop” Filipovic entered this fight with a kickboxing record of 22-8-0 (12 knockouts) and he is ranked as the No.7 heavyweight in the world, he won the K-1 Hw tournament in March 2013 beating Ismael Londt in the final (=Filipovic vs Londt); after that bout he has fought just once in 2014 but he lost to Remy Bonjasky (=Cro Cop vs Bonjasky 2).
His opponent, the 25-year-old Jarrell Miller (14 years younger than Filipovic), has an official record of 21-1-0 (9 knockouts) but he is not ranked as he hasn’t fought since March 15, 2013 when he faced for the first time Cro Cop (=Filipovic vs Miller). CroCop vs Miller 2 is on the undercard of Rico Verhoeven vs Daniel Ghita 2 – Glory 17. Watch the video and rate this fight!

(Alternative free embeddable video hosted on Myvideo.ge and not uploaded by AllTheBestFights, to report it please visit this link where the video is hosted)