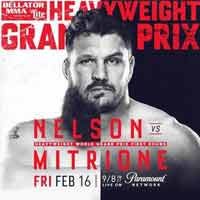 Review by AllTheBestFights.com: 2018-02-16, pretty good fight between Roy Nelson and Matt Mitrione 2: it gets three stars.

The black belt in Brazilian jiu-jitsu and Tuf Hw tournament winner Roy Nelson entered this fight with a professional mma record of 23-14-0 (83% finishing rate) and he is ranked as the No.15 heavyweight in the world. He fought twice last year losing to Alexander Volkov (Nelson vs Volkov) and beating Javy Ayala (Roy Nelson vs Javy Ayala).
His opponent, the black belt in karate Matt Mitrione, has an official record of 12-5-0 (92% ko/tko victory rate – he has never won via submission) and he entered as the No.16 in the same weight class. He lost twice between 2015 and 2016, against Ben Rothwell (Rothwell vs Mitrione) and Travis Browne (Browne vs Mitrione), but then he has won three fights beating Fedor Emelianenko in 2017 (=Fedor Emelianenko vs Matt Mitrione). In their first fight Nelson had defeated Mitrione in just one round (December 15, 2012, Roy Nelson vs Matt Mitrione I); this second fight, main event of Bellator 194, is the quarter final of the Bellator Heavyweight World Grand Prix tournament. Watch the video and rate this fight!