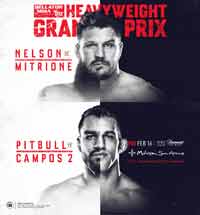 Review by AllTheBestFights.com: 2018-02-16, some good exchanges between Patricky Freire and Derek Campos 2 but it is not enough to get three stars: it gets two.

The black belt in Bjj Patricky ‘Pitbull’ Freire entered this fight with a pro mma record of 18-8-0 (67% finishing rate) and he is ranked as the No.7 lightweight in the world (currently the #1 in this division is Eddie Alvarez). Patricky Pitbull lost to Michael Chandler in 2016 (Chandler vs Freire 2) but he came back to win in 2017 defeating Josh Thomson (Thomson vs Freire) and Benson Henderson (Benson Henderson vs Patricky Freire).
His opponent, Derek Campos, has an official record of 19-6-0 (58% finishing rate) and he entered as the No.24 in the same weight class. He suffered two consecutive losses in 2015, against Michael Chandler (Chandler vs Campos) and the rematch with Brandon Girtz, but then he has won four bouts beating Derek Anderson (Anderson vs Campos) and taking revenge on Girtz (Derek Campos vs Brandon Girtz 3). In their first fight Freire had beat Campos in two rounds (April 18, 2014 Patricky Freire vs Derek Campos); this second bout is on the undercard of Roy Nelson vs Matt Mitrione 2 – Bellator 194. Watch the video and rate this fight!