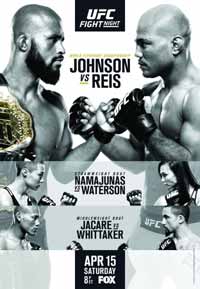 Review by AllTheBestFights.com: 2017-04-15, fight not particularly good between Jeremy Stephens and Renato Moicano Carneiro: it gets two stars.

Jeremy Stephens entered this fight with a record of 25-13-0 (76% finishing rate) and he is ranked as the No.7 featherweight in the world (currently the #1 in this division is Jose Aldo). He fought twice last year beating Renan Barao (=Barao Pegado vs Stephens) and losing to Frankie Edgar (=Edgar vs Stephens).
His opponent, the undefeated Renato Moicano Carneiro, has an official record of 10-0-1 (50% submission victory rate – he has never won via ko/tko) and he entered as the No.48 in the same weight class. He fought just once last year winning over Zubaira Tukhugov. Jeremy Stephens vs Renato Carneiro is on the undercard of Demetrious Johnson vs Wilson Reis – UFC on Fox 24. Watch the video and rate this fight!