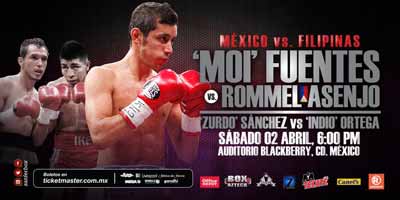 Review by AllTheBestFights.com: 2016-04-02, some good shots but it is not enough to get three stars: Moises Fuentes vs Rommel Asenjo gets two stars.

The former world champion in two different weight classes Moises Fuentes entered this fight with a pro boxing record of 23-2-1 (12 knockouts) and he is ranked as the No.6 light flyweight in the world. He lost to #1 Donnie Nietes in 2014 (=Nietes vs Fuentes 2) but then he has won four consecutive bouts beating Francisco Rodriguez Jr in his last one (=Rodriguez vs Fuentes).
His opponent, Rommel Asenjo, has a record of 28-4-0 (20 knockouts) and he entered as the No.82 in the same weight class. He fought three times in 2015 losing to Juan Francisco Estrada (=Estrada vs Asenjo) but then he won over Michael Rodriguez and Lester John Pronco. ‘Moi’ Fuentes vs Asenjo is the main event of the evening. Watch the video and rate this fight!