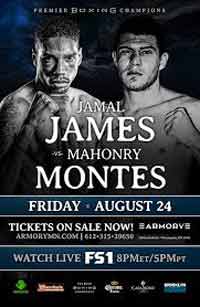 Willie Monroe Jr entered this fight with a boxing record of 22-3-0 (6 knockouts) and he is ranked as the No.12 middleweight in the world. He lost to Billy Joe Saunders last year (Billy Joe Saunders vs Willie Monroe Jr) but he came back to win in 2018 with Carlos Galvan.
His opponent, Javier Francisco Maciel, has an official record of 33-6-0 (23 knockouts) and he entered as the No.45 in the same weight class. He lost three consecutive bouts between 2015 and 2017, with Norberto Gonzalez, Mateo Damian Veron and Michel Soro, but then he has won three fights defeating Davi Eliasquevici. Monroe vs Maciel is on the undercard of Jamal James vs Mahonry Montes. Watch the video and rate this fight!

(Free embeddable video hosted on Dailymotion and not uploaded by AllTheBestFights)
https://www.dailymotion.com/video/x6snau9